First they came for the Socialists, and I did not speak out—
Because I was not a Socialist.

Then they came for the Jews, and I did not speak out—
Because I was not a Jew.

Then they came for me—and there was no one left to speak for me. 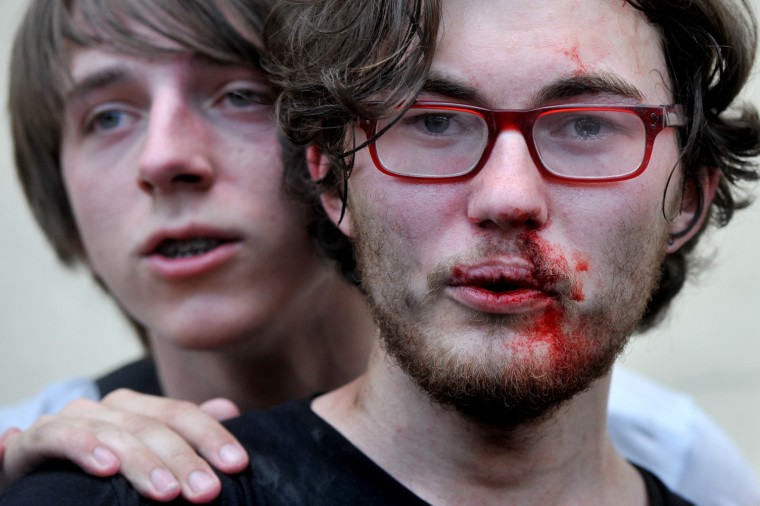 A friend of mine stopped by my house recently.

My friend was born male, but now identifies as female.

“I’ve only recently began to be able to walk down the street. I fear that if Donald Trump becomes president, then it will become open season on people like me.”

Our house is a safe haven in the middle of Indiana, a state which is anything but safe for people who are different.

There is a rainbow flag in the window and a Bernie Sanders sign in the yard.

Although my politics fall to the extreme left, I am no idealist.

I believe strongly that we should always attempt to use peaceful means to resolve conflict.

But I know that we must also take extreme measures to insure our freedoms from those who seek to limit them.

I live in the birthplace of the KKK.

It always takes bravery to be one’s self.

But let’s be real.

My friend is right to be afraid of violence under a Trump presidency.

We’ve seen the rallies and we’ve heard the hate-speech.

And then I added…

“Millions of people have your back.”

I live in a state where Mike Pence was the governor.

He passed laws making it legal for businesses to discriminate against members of the LBGT+ community and he passed laws discriminating against a woman’s right to choose.

We worked tirelessly to get a Pathway to Citizenship referendum passed, but our representatives would hide in their offices and refuse to meet with us.

But our problems are not unique to the Midwest.

And Donald Trump has not limited his hate-speech to members of just one community.

He has made hateful comments and threats to members of the Hispanic community, Blacks, Jews, women, Muslims and the differently-abled.

It is my belief that his nomination to the presidency will give rise to hate in America.

It is my belief that bigots of all varieties will feel emboldened by his ignorance and subsequent rise to power.

It is my belief that school-yard bullies and cowards of all stripes will feel that hate is not only acceptable, but rewarded.

What is a small child to think when they see that someone can stand on a podium and make hateful remarks and then this person can be rewarded to the extent that they are made the most powerful person on Earth?

A dangerous precedent has been set…

And it is up to us to fight every battle that will come our way during the next four years.

If you call yourself a Progressive then I am calling on you to prove it each and every time you see discrimination.

I am asking you to be a warrior.

I believe with all my heart that this is the duty of every American.

I’ve been all over this country and met tons of Trump supporters.

By and large they are good people.

Most of them are people who have worked hard their entire lives and they have watched their jobs get shipped overseas by trade agreements that hurt the American people.

Many of them lost their houses to a corrupt banking system and these same people are now paying for the bank bailout.

I want to be careful to not encourage the media’s portrayal of the Trump supporter as a dangerous and armed White Supremacist, but at the same time it is important to point out that some of Trump’s support actually comes from this small segment of our population and these people are potentially very dangerous.

It is our job to speak out when and where we see discrimination.

When I use the phrase A Call to Arms I do not mean that we take up firearms.

I sincerely hope that it will never come to that.

I am speaking instead of a much more effective means of fighting.

I am referring to compassion and activism.

I am asking everyone who reads this to be an ally every day in every way that life presents to you.

And I am asking you to look for new opportunities to be brave in a world that is often hostile.

Most of you reading this are more than likely already doing amazing things in your communities.

“What can I do to help the cause of equality?”

“What can I do to make the world a better place?”

In the past year we have learned, beyond any shadow of a doubt, that our country has a long way to go to reach equality for all of its citizens.

Some might view Trump’s election and candidacy as a setback to this cause.

But at least the hatred is out in the open now.

Now we know what we are dealing with.

It is the duty of all good people to go above and beyond.

When millions of people stand together..

By signing in the comments below and sharing this article with a friend you agree to do the following, as well as millions of other creative acts of kindness.

I promise to smile and speak to people.

I promise to feed those who are hungry.

I promise to speak out against discrimination anywhere and everywhere I see it.

I promise to fight any and all legislation that attempts to legalize hate.

I promise to comfort victims.

I will attend rallies and protests for minority and women’s rights.

I will compassionately educate those with small minds.

I will listen to people and consider their points of view.

I will be slow to anger and quick to forgive.

I will not name-call, fat shame, slut-shame or engage in any other form of discrimination against people based on religion (or lack thereof), appearance or ethnicity.

I will abstain from supporting corporations that do not promote Progressive values.

I will do anonymous good deeds and random acts of kindness.

I will call and write my elected officials and tell them what legislation is important to me.

I will rally people together to vote out politicians who do not support my values.

I will be kind to animals and children.

I will assist the disabled and the elderly.

I will fight for a pathway to citizenship, so that all people who want to truly “make America great again” can come and contribute to our society.

I will treat those in the service industry with kindness and respect.

I will make eye contact and ask people how their day is.

I will fight against pre-programmed knee-jerk reactions.

I will love people.

Not just those who are easy to love…

I will make the world a better place.

I will be an ally to anyone who needs it.

I want to make this page a place where people can celebrate compassion and diversity.

I want to encourage people to come here and share stories of times when you stood up for something good.

Don’t look at it as bragging.

It helps people to be able to read your stories.

It inspires them to take their own giant steps.

It inspires others to be brave.

Thank you for participating in my project.

Love to you all.

Michael is an activist, an ally and an independent writer. If you believe in his work and his mission you can support it by donating $1 HERE. He will probably use it to create a sign for a protest or some other crazy liberal activity.

17 thoughts on “A Progressive Call to Arms”